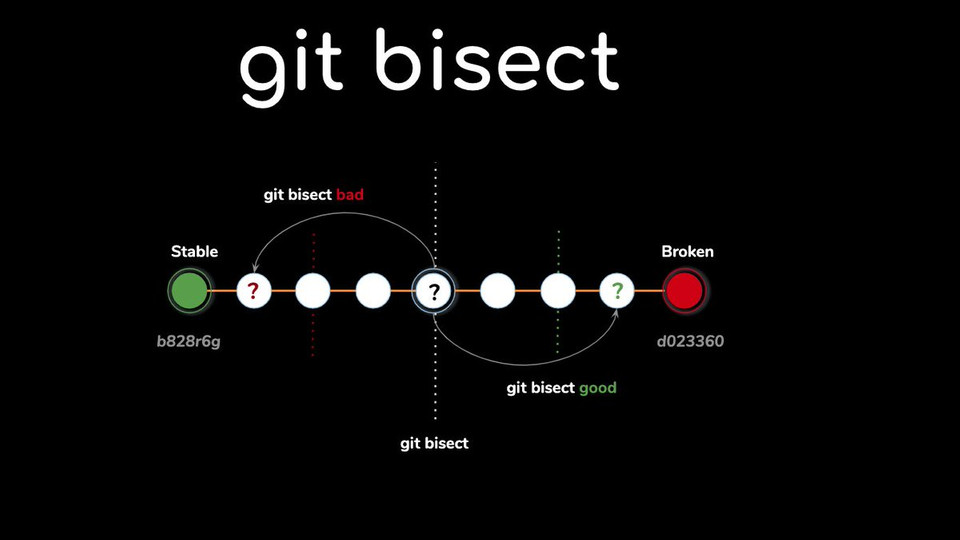 Want to find a bug that was introduced some time ago?

We can use binary search using Git to find the culprit.

The answer is - git bisect.

Let's dive into an introduction and see how we can use it.

Link to this heading
Where to start from?

You've seen something is broken with the latest changes on your development branch and want to find to the problem.

First, you need to find an old commit where everything was working as expected.

Then proceed with executing the following command:

Link to this heading
Bad commit

Almost nothing is being done at this point.

Now you need to tell Git which is the bad commit. Most probably just going to be HEAD/latest commit.

You could use commit hash as well.

Link to this heading
Good commit

Then comes the part where we need to tell Git which is the good commit where everything was working fine.

Link to this heading
Bisect has been started

Awesome - you've started the bisecting now and should see something similar to:

You are now moved to a commit somewhere in the middle between the bad and good commit.

Link to this heading
What information is Git giving us?

157 revisions - showing the number of commits between the bad and the good commit.

roughly 7 steps - showing you how many steps you will need until the end.

[<commit-hash>] <commit-message> - showing at which commit you are currently at.

Link to this heading
Proceeding further

Test the commit and based on the result proceed further.

You will be moved to the next commit for testing.

Repeat the process until there are no more steps and commits to check.

In the end, Git will output the first bad commit where the problem was introduced.

Hopefully, it was useful and you have a new tool in your arsenal now to tackle a problem using Git 💪.